House of David Blues (The)

Back to House of David Blues (The)

HOUSE OF DAVID BLUES. American, Country Blues (2/4 time). G Major. Standard tuning (fiddle). AB. Tennessee's Fiddlin' Arthur Smith (d. 1971), along with his group the Dixieliners (later to become the Delmore Brothers) recorded this old blues song in 1937. At the turn of the 20th century the House of David, a religious sect, was perhaps better known as the sponsors of a touring baseball team than for their spiritual tenets. The team was made up of bearded acolytes. The society had been founded by Benjamin and Mary Purnell in Benton Harbor, Michigan, in March, 1903, and at its peak numbered several hundred members in a self-sustaining community. However, it was beset around 1920 by allegations of sexual relations between the patriarch and minors, which soon split the community. 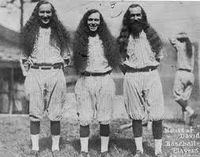 Lyrics to the melody go:

Back to House of David Blues (The)