HOUSE OF GLENKINDY'S, THE. Scottish, Strathspey. G Major. Standard tuning (fiddle). AB. Composed by fiddler-composer Alexander Walker, born in Rhynie, Strathbogie, Aberdeenshire in 1819. Walker was an inventor (of surveying instruments, for example), agriculturalist, fiddler and composer of works collected in a volume published in Aberdeen in 1866. He was employed as a gardener for Sir Charles Forbes at Castle Newe, who was also his patron. While in Scotland he took a wife, Jean (11 years his junior), and at age 40 became father of a daughter, Maggie, followed by three sons (Charles, Alexander and George—Charles perhaps named after Sir Charles Forbes). Walker knew a young J. Scott Skinner, who was employed as a dancing master for the tenantry of the Queen’s residence at Balmoral, and co-wrote a tune with him. Walker himself played in bands for entertainments given by the Royal Family [Allan Thomas, A New Most Excellent Dancing Master, 1992 ]. 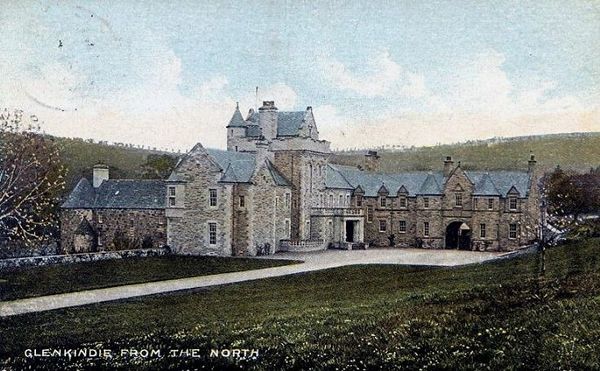 Glenkindie House, near Towie in west Aberdeenshire, was a 16th and 17th century U-plan house constructed in 1785 over the site of a house originally built in 1595 and destroyed in 1644. Sir Patrick Strachan was heritor of Glenkindie from around 1721 until 1738, when his creditors sold the estate to Alexander Leith of Freefield. Leith 'modernized' in the Georgian style in 1741. The Leith family built an addition around 1900, and held the estate through much of the 20th century.