Find traditional instrumental music
This is the stable version, checked on 1 April 2021.
Jump to: navigation, search

Back to Hugh Dougherty's Essence 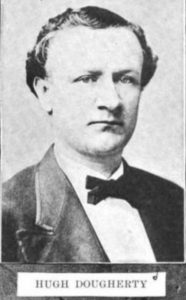 HUGH DOUGHTERY, familiarly known as "Hughey", was born in Philadelphia, Pa., on July 4, 1844. He first appeared as a jig dancer with or portion of the Old Virginia Serenaders at the Adelphi Hall, corner of Fifth and Adelphi streets, Philadelphia. His debut was a complete success, and Hughey, flushed with his triumph, sought other fields. He next appeared at Southwark Hall, dancing with the lamented John Diamond. He then appeared at Sanford's Opera House (later Carncross & Dixey's) on Eleventh street, Philadelphia, in 1859, remaining there for several years. His star now being in the ascendant, he traveled throughout the country, delivering his famous stump speech which made him so popular. In Detroit, Hughey was known as "Young America," with Hugh Eagan in Beller's Concert Hall in 1862; at that time he was a jig-dancer and snare drum soloist. He went to South Africa in 1870 or 1871, returning several years later. Hughey then appeared with Sam Sharley's Minstrels, then with Skiff & Gaylord's Minstrels, and then for an engagement at Frank River's Melodeon, on Callowhill street, Philadelphia, and later was a reigning favorite at the Morris Brothers', Boston, Mass. He then held managerial reins in company with John Wild, Master Barney and Little Mac, and the troupe was at that time in all respects the finest one seen for many years. He then joined Duprez & Benedict's Minstrels and went to Australia and South America. He came back and played in vaudeville for quite a while, and then rejoined Dumont's Minstrels at the old Eleventh Street Opera House, Philadelphia, and has been there practically ever since."

Doughtery's stay in South Africa beginning in 1870 was on the light side of "several years" for he was back in the United States in early 1872. In February of that month he was was assaulted, beaten and robbed by a trio of ruffians, "Curly" Harris, "Brummagem Bill" and bare-knuckle boxer James "Jimmy" Elliott in Bonnel's saloon, Ninth Street above Jayne, Philadelphia. Later that night the trio accosted a policeman nearby, shooting him in the torso, which he survived by dint of a fortuitously-placed belt buckle. The trio was caught and convicted. Elliot, a self-proclaimed bare-knuckle champion of the world, was indeed a fearsome fighter who nonetheless lost several of the high stakes boxing matches he engaged (in between his periods of incarceration). For the crime against Dougherty (who suffered near-fatal injuries) Elliott was sentenced to eighteen years in the Eastern state penitentiary, Philadelphia.

A 'sand jig' was a type of duple-time tune usually played on the banjo as an accompaniment to a solo stage dance akin to a schottische or hornpipe.

Back to Hugh Dougherty's Essence