HUGH O'DONNELL ("Pleraca Aod Ua Domnaill" or "Planxtae Aodha Mic Domhneil"). AKA - "Planxty Hugh O'Donnell." Irish, Air or Planxty (6/8 time, "animated"). C Major (most versions): G Major (Johnson). Standard tuning (fiddle). AB (Complete Collection…, O’Sullivan, O'Sullivan/Bunting): AAB (Johnson): AABB (O'Neill). Composed by Turlough O'Carolan (1670-1738) in honor of Hugh, one of the sons of Colonel Manus O'Donnell of Newport, Co. Mayo. Hugh married Maud Browne, of Mount Browne, Co. Mayo in 1728, reports O'Sullivan (1958), who also provides further family history. It seems that the Colonel was the great-grandson of Niall Garbh O'Donnell, who had the curious miss-circumstance to be offered the earldom of Tyrconnell by both Elizbeth and James. Instead of this dual offer securing his fortune, however, it sealed his fate, for he was brought to England in 1608 where he languished in the Tower of London for twenty years until his death.

The air was first published by music sellers and publishers John and William Neale in Dublin around 1742 (the previous date of 1721 for this publication has been found to be erroneous--see Appendix to the 2001 edition of O’Sullivan’s Carolan). 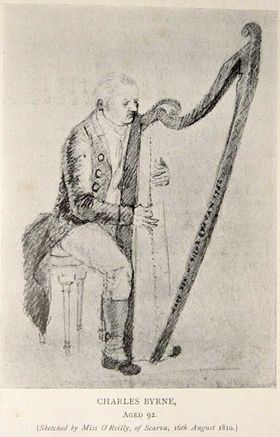 A sketch by Miss O'Reilly, 1810, from Charlotte Milligan Fox, Annals of the Irish Harpers, 1911