Back to Humors of Ballinlass (The) 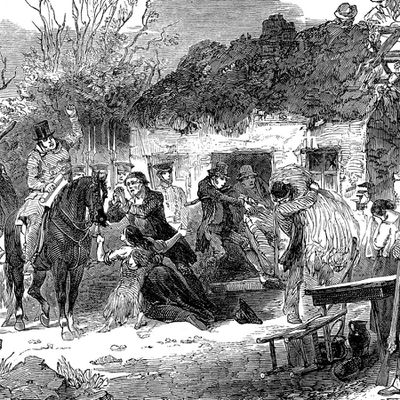 HUMORS OF BALLINLASS, THE (Sugra Baile-an-Leasa). AKA and see "Breen's Hornpipe," "Chancellor (1) (The)," "Feis Hornpipe," "Happy Couple (The)," "Mahoney's Hornpipe," "Sports of Listowel (The)." Irish, Hornpipe. G Major. Standard tuning (fiddle). AABB'. Ballinlass is a townland in County Galway. It was the location of an infamous eviction of 300 tenants in 1846, during the Great Famine. Despite that the tenantry had the ability to pay their rent (as the famine had not devastated the area), the landlord, Mrs. Gerrard, desired to establish a grazing farm where the village was situated. The event was widely condemned, but the order was not rescinded.

"Chancellor (The)" title was used for this tune by North Kerry fiddler Paddy O'Sullivan, remarks Paul de Grae, who says he "always assumed that the title was a reference to Chancellor Bismark, but have not a shred of evidence to support that notion."

Back to Humors of Ballinlass (The)