Find traditional instrumental music
This is the stable version, checked on 25 October 2022.
Jump to: navigation, search

Back to Humors of Six Mile Bridge

HUMOURS OF SIX MILE BRIDGE, THE. AKA and see Irish, Reel (whole time). G Major. Standard tuning (fiddle). AAB. Sixmilebridge [1] (Droichead Abhann Uí gCearnaigh) is a place-name in County Clare, a small town between Ennis and Limerick city. Kennedy gives alternate titles as "Banks of the Ilen (The)" and "Six Mile Bridge," although those tunes appear to me to be distanced variants. The reel is contained in vol. 2 (p. 151)[2] of the large mid-19th century music manuscript collection of County Cork cleric and uilleann piper James Goodman, who had copied it from the music manuscripts of 19th century Dublin bookseller John O'Daly, according to researchers Hugh and Lisa Shields[3]. Collector P.W. Joyce also had access to O'Daly's mss. 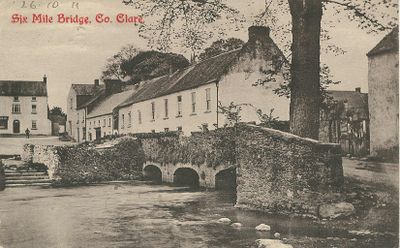 Additional notes
Source for notated version : - James Goodman (1828-1896) entered the tune into his manuscript, having obtained it from the music manuscript collections of Seán Ó Dálaigh (John O'Daly, 1800-1878), the great nineteenth-century scribe; compiler and collector of manuscripts; editor; anthologist; publisher of Gaelic verse and stories and founder of societies for the publication of Gaelic literature, best-known today for his volume Poets and Poetry of Munster (1849). O’Daly was born in the Sliabh gCua area of west Waterford and was, like Goodman, a teacher of Irish.

Back to Humors of Six Mile Bridge