Find traditional instrumental music
This is the stable version, checked on 28 September 2020.
Jump to: navigation, search

Back to Hunting the Wren

HUNTING THE WREN. English, Irish. Hunting the wren was at one time a significant tradition in England [1], and still exists to some extent in Ireland. The event took place on St. Stephen's day and, like many similar ritual traditions it is commonly thought to have pre-Christian origins and to be associated with the winter solstice. The Druids thought the wren the "king of all birds." In folklore, it was the wren that betrayed St. Stephen, the first Christian martyr, and because of this betrayal the bird was to be slain on his feast day. The Manx ritual was described thus: On the appointed day boys would get up at early dawn and go out in groups hunting the wren, armed with long sticks. They beat the bushes until they found one of the unfortunate creatures, and with much shouting followed it from bush to bush until at last they succeeded in killing it. The wren was suspended in a garland of ribbons, flowers and evergreens and a procession formed that proceeded from house to house, soliciting contributions from each. A feather was given for luck upon receipt of the small donation, and these were considered such a potent charm for preservation from shipwreck that many sailors would not venture out without having procured several of the items. The dreain, or wren's feathers, were also considered an effective preserve against witchcraft. Sometimes the plucked, naked body of the wren was interred in a secluded corner of the churchyard, with great solemnity, after which there would be wrestling and games. (from Manx Soc. vol. 16) 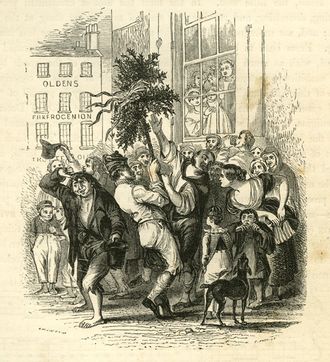 Although largely a British Isles tradition, the wren hunt was also performed on the Continent at one time. Sonnini in his travels, relates that "the inhabitants of the town of Cistat, near Marseilles, armed with sabers and pistols commence the anniversary by hunting the wren, and when captured is suspended, as though it were a heavy burden, from the middle of a long'pole borne on the shoulders of two :men, carried in procession through the streets, and weighed on a balance." 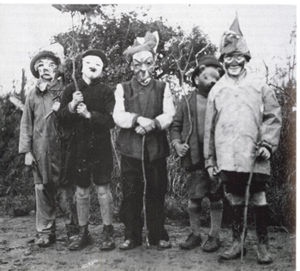 Wrening traditions vary, but many British Isles traditions are variants of mummers plays with the familiar themes of death and rebirth. Musicians and dancers would gather and go from house to house and perform as well ritual texts in the guise of stock characters such as St. George, St. Andrew, the Turk, the Doctor etc. There is usually a conflict between good and evil, with good resurrected at the end. As with mummers disguises were often worn. In Ireland groups were known as "Strawboys" from the nature of their woven straw suits and masks (see Henry Glassie's book All Silver and No Brass {1975} for more). The following stanzas of words (only the first few appear here) and the air below were collected on the Isle of Mann in 1842:

What shall we do there? says Robin to Bobbin;
Repeat these lines as above.

We will hunt the wren, says Robin to Bobbin.
Repeat, etc.

Crofton Croker, in his Researches in the South of Ireland (1824), mentions this custom as prevailing there, and the practice was preserved in County Kerry and in certain areas of north County Dublin, according to Caoimhin Mac Aoidh. The 1970's traditional music revival brought a renewed interest in mumming traditions, including the Wrenboys, and some impetus remains today in isolated areas.

Back to Hunting the Wren