Find traditional instrumental music
This is the stable version, checked on 21 December 2022.
Jump to: navigation, search

IDBURY HILL. AKA and see "London Pride." English, Morris Dance Tune (4/4 time). E Minor (Mallinson): D Dorian (Bacon, Carlin). Standard tuning (fiddle). AABB, x4 (Mallinson): AABA (Bacon): AA'BB' (Carlin). Idbury Hill is a side-step handkerchief dance collected with the melody in the Bledington, Gloucestershire, area of England's Cotswolds. Idbury [1], Oxfordshire, is a village not far from Bledington, across the county border. The tune is also used for the dance "Three Musketeers," and a similar tune was collected in Bampton without the "slows". 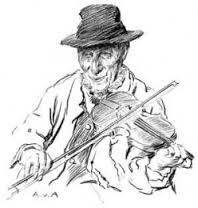 A portrait by artist A van Anrooy of an old country fiddler was printed on the cover of Peter Kennedy's influential Fiddler's Tune Book. It depicts Charles Benfield (1841-1929), fiddler for the Bledington morris men in the second half of the 19th century. Benfield started out by playing the pipe and tabor, instruments he had 'inherited' from the renowned Sherbourne and Northleach musician Jim 'the laddie' Simpson, who had succumbed to an overdose of alcohol in 1856. Benfield played at various times for the morris sides of Milton-under-Wychwood, Idbury, Fyfield and Longborough and became a key figure in the Bledington morris tradition of the latter 19th century. He eventually lead the "junior side" of dancers born in the 1860's, men who survived to pass on their tradition to larger audiences when collectors visited in the 1930's. Cecil Sharp's biographer, Fox Strangway, relates that the famous collector presented a bow to Benfield, whose own had been broken some years previously and as a result his fiddle had been silent. The elderly musician took the bow, tuned up the fiddle and played a few tunes, but was not pleased with the result. He then appraised the bow thoughtfully, and admitted that 'it seemed a nice bow' and 'looked all right', but that it "somehow won't keep time with the other hand." [Pete Cooper]. 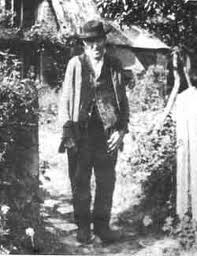