Find traditional instrumental music
This is the stable version, checked on 18 March 2022.
Jump to: navigation, search

Back to Indian Squaw (2)

INDIAN SQUAW [2]. AKA - "Two Little Indians and One Old Squaw." AKA and see "Banks of the Arkansas." American, Reel (cut time). G Major. GDad tuning (fiddle). AB. Some similarities to Alva Greene's version (see "Indian Squaw (1)"). Hiram Stamper's [1] (1883-1992) archaic version apparently was derived from a song. Stamper whistled to the 'B' part of the tune, and sang to the 'A' part:

Way down yonder on the Arkansas,
Two old Indians and one old squaw,
Sitting on the banks of the Arkansas.

Jeff Titon (2001) finds nearly the same lyric in a song called "Bank of the Arkansas (The)" printed in Lomax and Lomax's Our Singing Country (1941, pp. 68-69), although Titon says tune that appears with that song is the same as that of Clyde Davenport's "Cornstalk Fiddle and a Shoestring Bow." 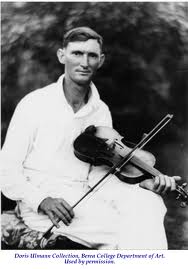