Back to Indian War Whoop (1)[edit]

INDIAN (WAR) WHOOP [1]. Old-Time, Breakdown. USA; Arkansas, Mississippi. David Freeman (1975) relates that this was fiddler Hoyt Ming's (of Lee County, Mississippi) most requested tune and was a novelty piece. A drawn-out note on the fiddle simulated the war whoop of and Indian, which was then carried on by Ming's voice. In performance Ming would put the fiddle on his lap during this vocal part, and "sometimes went so far as to actually put the fiddle in its case for added effect. Hoyt tells of an occasion when one curious spectator was so mystified by this musical sleight-of-hand that he grabbed the fiddle out of the case and took the instrument off to a corner to inspect it closely, thereby bringing that evening's rendition of 'Indian War Whoop' to an abrupt end." 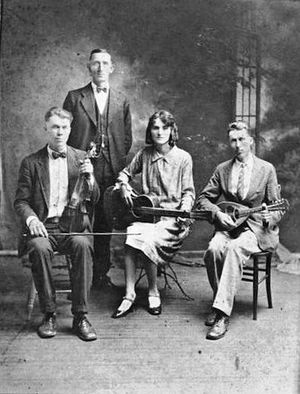 This is confirmed by Hoyt B. Ming, Hoyt Ming's son, who also remembered that it was the tune his father was most famous for. The younger Ming said: "My father learned this tune from a cousin, fiddler Pearl Burdine, and in the early years Dad would play the tune and mimic the fiddle as he put it back in the case. To many, it seemed the fiddle was still playing. Once a person stopped me on the street in my hometown and asked me how my dad's fiddle continued to play while he rosined the bow. The performance would draw good applause" (Old Time Herald, Spring 2001; vol.7, No. 7, p. 3). It is interesting to note that the 'whoop' feature was integral to the tune as far back as 1839, when a version was published by George P. Knauff.

Harry Smith (1952) notes that Ming's Pepsteppers' drumming of feet on the recording is a performance more common in religious music. He writes: "The effect of pre-Columbian America on contemporary music has been chiefly to act as a catalyst between European and African musical elements. It is doubtful if this recording bears much real relation to Indian music; it is, rather, romanticism akin to that of 'Western' movies." In fact, the tune is associated with a movie: Ming's version was reprised by David Holt for the film "O Brother Where Art Thou?" The melody is frequently cited as an "Ozark tune." A Missouri version (Indian War Whoop (5)) comes from the playing of Ed Sutherland.

Back to Indian War Whoop (1)[edit]