Back to Inman Line

INMAN LINE. American, Reel. A Major. Standard tuning (fiddle). AABB. Composed by H. F. Williams. The Inman Line [1] was a highly competitive steamship transatlantic line in the the second half of the 19th century, founded originally as the Liverpool and Philadelphia Steam Ship Company in 1850. In 1878 the line made 68 voyages, landing 44, 100 passengers, more than any of its rivals. Although the line was eclipsed in the next decade by the White Star and the Cunard operations, the Inman maintained good passenger loyalty.

Perhaps the earliest recording is from 1913 by violinist Charles D'Alamaine, born in 1871 in England, who died in 1943. D'Alamaine immigrated to the United States in 1888, and by 1890 had established himself as "instructor on violin" in Evanston, Illinois; by 1910 he had removed to Yonkers, and in 1920 was a chiropractor in New York City (info. from Paul Gifford). 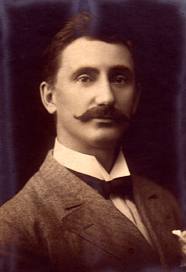 Back to Inman Line