INVERARY CASTLE (Caisteal Inbher-aora). Scottish, Strathspey. E Minor (Skye): F Sharp Minor (Fraser, Köhler, Lowe, Skinner): G Minor (Davie). Standard tuning (fiddle). AB (most versions): AAB (Davie, Lowe). Inverary Castle is the seat of the Dukes of Argyll. In his notes for the tune Captain Simon Fraser states: "Inverary Castle, and Argyllshire in general, is a part of the country the editor has not much frequented; but this air celebrates the splendour of that edifice, and the magnificence, tempered with benevolence and condescension, therein supported by the late Duke." Composition of the melody was attributed to Fraser in Lowe's collections, though Fraser himself never indicated this was so in his writings. Inverary Castle originally dated around 1520, although a 'new castle' was built alongside it by Morris and Mylne, who drew up plans in the early 1700's. It was completed in 1770 and the old castle torn down. It was the 5th Duke, who when Marquis of Lorne, modernized it and completed its decoration. Today it ranks as a spectacular early example of neo-gothic building in Britain. Castle Inverary is said to be haunted by a ghostly harper, the murdered victim of the troops of the Duke of Montrose in pursuit of Campbell enemies. Like the Irish banshee, this dark-tartaned ghost appears most often to women visitors, often in the Blue Room of the castle, and his music sometimes presages the death of one of the Dukes or Argyll or sounds on the occasion of their funerals (Sanger & Kinnaird, Tree of Strings, 1992). 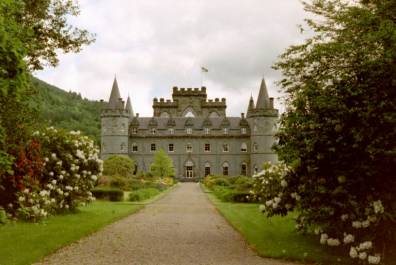