Find traditional instrumental music
This is the stable version, checked on 14 May 2022.
Jump to: navigation, search

Back to Inverness Gathering (The)

The name Inverness means 'mouth of the river Ness'. Ness was the name of a legendary Irish queen, mother of Conchubar, who is supposed to have ruled in Ulster at the time of Christ (though the river name may be older). The Inverness Gathering is the name of the annual Highland Games sponsored by the city of Inverness, Scotland, and were established in 1822. 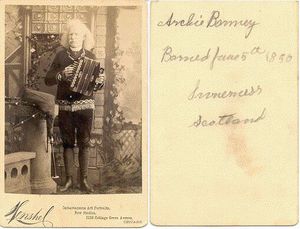 Archie Barnie, an albino performer from Inverness in the mid-19th century
"Inverness Gathering" was recorded for Decca Records in 1934 by Alick Gillis and the Inverness Serenaders but it was never issued.

See also the County Donegal variant "March of the Meenatoiteen Bull (The)."

Back to Inverness Gathering (The)