Back to Inverness Lasses

INVERNESS LASSES (Caileagan a'Bhaile Mhor). Scottish, Canadian; Reel. Canada, Cape Breton. F Major. Standard tuning (fiddle). AAB (Lowe): ABB' (Fraser): AABB (Reiner & Anick): AABB' (Athole). "The editor trusts the young ladies of the northern capital will not spurn at being comprehended in this familiar epithet. His respect for them is no less than if he had paid them the well merited compliment of am author of celebrity, for their beauty and accomplishments. Vide Terraquea, of Modern Geography, by the Reverend J. Gordon, Ireland" (Fraser). The end of the 'A' part features a circle of 5ths chord progression. Paul Stewart Cranford (1995) suggests that Simon Fraser may have composed this particular tune, or at least many more than he claimed in his collection, due to the expectation that the Highland Society of Scotland may have expected a high percentage of 'traditional' pieces for the work to be endorsed. The name Inverness means 'mouth of the river Ness'. Ness was the name of a legendary Irish queen, mother of Conchubar, who is supposed to have ruled in Ulster at the time of Christ (though the river name may be older). 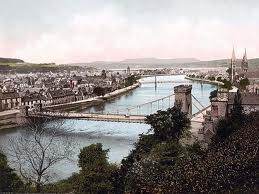 Back to Inverness Lasses