Find traditional instrumental music
This is the stable version, checked on 25 August 2021.
Jump to: navigation, search

Back to Irish Washerwoman (1) 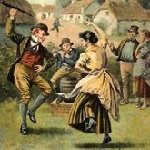 IRISH WASHERWOMAN [1], THE (An Bhean Niochain Eireannach). AKA – "Washerwoman (The)." AKA and see "Corporal Casey (1)," "Country Courtship (The)," "Dargason," "Free Masons (1)," "Irishwoman," "Irish Wash-Woman (The)," "Irish Waterman," "Jackson's Delight (1)," "Melody of Cynwyd (The)," "Paddy McGinty's Goat," "Wash Woman (The)," "Scheme (The)," "Snouts and Ears of America (The)," "Star at Liwis," "Sedany," "Yr Hen Olchyddes." Irish, English, Scottish, American; Double Jig. USA; Very widely known. G Major (most versions, 'B' part is in G Mixolydian in some Scottish versions): D Major (Clinton): F Major (Petrie). Standard tuning (fiddle). AA'B (Breathnach): AABB (most versions): AA'BB' (Gow, Perlman): AABBCC (Ashman). Although the tune has popularly been known as an old, and perhaps quintessential Irish jig, it has been proposed by some writers to have been an English country dance tune that was published in the 17th century and probably known in the late 16th century. Samuel Bayard (1981), for example, concludes it probably was English in origin rather than Irish, being derived from the air called "Dargason," or "Sedany" as it is sometimes called. Fuld (1966) disagrees, believing "Dargason" (which he gives under the title "Scotch Bagpipe Melody") and "The Irish Washerwoman" developed independently. "Dargason" was first printed in Ravenscroft's Pammelia (1609) and appears in the Playford's Dancing Master editions from 1651 to 1690, but subsequently the "folk process" melded the strain to other parts, thus making other tunes (see "Green Garters (3)" for example) including the precursors to the Washerwoman tune. One of these precursors was the English tune "Country Courtship (The)," which dates from at least 1715 and probably to 1688, in which latter mentioned year it was first entered at Stationers' Hall. "The Irish Washerwoman" appears to have developed from "Country Courtship (The)," which was extremely popular in the 19th century, as the tune under the "Washerwoman" title was to become a little later. The ending of the jig is the same as the endings of "In Bartholemew Fair" and "Free Masons (1)." Breathnach (1976) finds the second part identical to that of "Star at Liwis or Scheme (The)" printed by London publisher J. Walsh in Caledonian Country Dances (c. 1730, p. 59). The melody was found by the author of English Folk-Song and Dance (p. 144) in the repertoire of fiddler William Tilbury (who lived at Pitch Place, midway between Churt and Thursley in Surrey), who used, in his younger days, to play at village dances. Tilbury learned his repertoire from an uncle, Fiddler Hammond, who died around 1870 and who was the village fiddler before him. The conclusion was that "Haste to the Wedding" and melodies of similar type survived in English tradition (at least in southwest Surrey) well into the second half of the 19th century. Multi-instrumentalist John Rook (Waverton, Cumbria), for example, entered it into his large 1840 music manuscript collection. The jig is played very fast as an accompaniment for Northumbrian rapper sword dancing.

A variant of the modern version of the tune appears as air 13 in Samuel Arnold's stage piece The Surrender of Calais, report Van Cleef and Keller (1980), which was first performed in London in 1791. It was sung by the character O'Carrol, and Irish soldier, and the song became known as "Corporal Casey:"

When I was at home I was merry and frisky
My Dad kept a pig and my mother sold whiskey.
My Uncle was rich but he would never be easy
'Til i was enlisted by Corporal Casey.
Oh, rub a dub, row de dow Corporal Casey,
My dear little Sheelah I thought would run crazy,
Oh when I trudged away with tough Corporal Casey.

As "Corporal Casey," the tune appears in Instructions for the Fife (London, 1795). The melody also found its way into various broadsides and similar 'low' publications, such as the latter 18th century "Irishman's Epistle to the Officer's and Troups at Boston" (sic). Later the song "Paddy McGinty's Goat" was set to the tune of "Irish Washerwoman." Shropshire musician John Moore penned a version in his notebook of c. 1837-1840 which has a third part in 3/8 time, breaking the pattern of the rhythm—perhaps, thinks editor Gordon Ashman, it was used in an introductory mode for "setting" or "step to your partner." Under the title "The Irish Quadrilles" it was included by Lincolnshire papermaker and musician Joshua Gibbons in his 1823–26 music manuscript book.

Fuld (1966) finds the earliest printings of the tune under the title "Irish Washerwoman" to be in Neil Gow's A Third Collection of Strathspey Reels &c for the Piano-forte, Violin and Violoncello (1792) and James Aird's A Selection of Scotch, English, Irish and Foreign Airs (1794). Breathnach noted Dublin publication of "The Wash Woman" by Henry Mountian, c. 1785 and Ó Canainn (1978) finds it printed in Brysson's A Curious Selection of Favourite Tunes with Variations to which is appended "Fifty Favourite Irish Airs" (Edinburgh, 1790) under the title "Irish Waterman." Fuld also finds the melody under the title "Melody of Cynwyd (The)" in Edward Jones' Musical and Poetical Relicks of the Welsh Bards (London, 1794). A manuscript of Welsh Triple Harper Thomas D. Llewelyn ‘Llewelyn Alaw’, from Aberdâr, a 19th century collector of Welsh music, gives the title as "Yr Hen Olchyddes" (The Washerwoman). Bruce Olson suggests that "The Wash Woman" was probably the original title, with 'Irish' being prefixed to the title outside of Ireland as an identifier—he thinks there were probably many tunes with 'Irish' in the title that identified place of origin and that were not part of the original title.

By the end of the 18th century the tune was identified with Ireland, and it is not surprising that that country also has laid claim to the tune. It has been reported that it was written by 19th century piper, fiddler and composer "Piper" Jackson, who was from either County Limerick or County Monaghan (according to the Boys of the Lough). Breathnach (1976) reports that Henry Mountain, No. 20 White Friar Street, Dublin, printed the melody in about the year 1785, calling it "The Wash Woman, a favourite New Country Dance." A few years later is appeared in Lee's New Collection of Irish Country Dances for the Year 1788. The title appears in a list of tunes in his repertoire brought by Philip Goodman, the last professional and traditional piper in Farney, Louth, to the Feis Ceoil in Belfast in 1898 (Breathnach, 1997). In modern times in Ireland the tune is rarely played, remarks Caoimhin Mac Aoidh, as it is considered trite and hackneyed, though it does retain strong currency among County Donegal fiddlers who play several elaborate versions. Doolin, County Clare, whistle player Micho Russell called it "Big Jig (The)."

American versions with the "Washerwoman" title appear toward the end of the 18th century. It was contained in A Collection of Contra Dances (Stockbridge, Massachusetts, 1792) under the title "Irish Wash Woman," and several American dance copybooks contain various dances to the melody, including Nancy Shepley's Manuscript (Pepperell, Massachusetts, c. 1795) and different figures in Asa Wilcox's MS (Hartford County, Connecticut, 1793). A third dance can be found in Gentleman and Lady's Companion (Norwich, Connecticut, 1798), while A Collection of Contra Dances (Stockbridge, Massachusetts, 1792) gives a dance similar to that copied by Shepley. Van Cleef and Keller (1980) state the name changes from "Irish Wash Woman" to "Irish Washerwoman" around 1795; it appears under the latter title in Benjamin and Joseph Carr's Evening Amusement in 1796 (Philadelphia). American musician M.E. Eames entered it into his 1859 music copybook (p. 70). The tune retained its popularity, at least for contra dancing, and was cited as having commonly been played for Orange County, New York country dances in the 1930's (Lettie Osborn, New York Folklore Quarterly), by 20th century Arizona fiddler Kenner C. Kartchner for dances in the Southwest, and by contemporary Buffalo Valley, Pa., dance fiddlers Ralph Sauers and Harry Daddario. Viola "Mom" Ruth, in her collection Pioneer Western Folk Tunes (1948) appends to the "Irish Washer Women" that it was what she played when she "Won the state's (Arizona) championship 1926." Galax, Virginia, fiddler Emmett Lundy had a waltz version of "Irish Washerwoman," and southeastern Tennessee fiddler Blaine Smith played a duple-time version, as did Arkansas fiddler Absie Morrison (1876-1964)—see "Irish Washerwoman (2)." However, folklorist Vance Randolph remarked that "Irish Washerwoman" was regarded as very naughty in the Ozarks in the early days, because of vulgar words sung to it that were widely known. "Mrs. M. M. of Kirbyville, Mo., said that when she was a girl in the 1890's, 'decent girls would get up and leave a dance if a single bar of that tune was played'." [1] Tommy Dandurand recorded it as a vehicle for a 'singing call' in the 1920's, which became fairly well-known among square dancers in the United States, says Paul Gifford. O'Neill printed the tune as "Irishwoman" in his 1915 O'Neill's Irish Music, presumably editing out the word 'washer' in the title because he found it demeaning or offensive. The earliest sound recording of the melody is by Charles D. Almaine (1904), and it was issued on American 78 RPM's by Maine fiddler Mellie Dunham (1926), Kentucky fiddler Doc Roberts with guitarist Asa martin (1928) and Virginia's Kessinger Brothers (1930).

Other than for dancing, it was popular as a vehicle for "American stage Yankees," and according to Bronner (1987) it was included in the music to the "Federal Overture" (published by B. Carr in 1795) which played to theatres in Philadelphia and New York just prior to and at the beginning of the 1800's. Outside of the east coast Musicologist/folklorist Vance Randolph recorded the tune for the Library of Congress from Ozarks Mountains fiddlers in the early 1940's and it was recorded as having been predicted by a local southwest Alabama paper (the Clarke County Democrat) in May, 1929, that it would by played at an upcoming fiddlers' contest. It appears in the repertoire list of Norway, Maine, fiddler Mellie Dunham (the elderly Dunham was Henry Ford's champion fiddler in the 1920's). Galax, Virginia, region fiddler Emmett Lundy, who had an archaic style, played a waltz version of "The Irish Washerwoman."

The melody is referred to by Bayard (1944) in his note for "Snouts and Ears of America (The)," but Breathnach (1976) regards it as a "stain on the honour of washer women" that the tune was used for that song and "Paddy McGinty's Goat" in the United States. Bayard reports that in Pennsylvania the following rhymes were collected with the tune:

I have heard nearly the same rhyme with the name "McTavish" substituted for "Jim Doodle." Also from Pennsylvania:

The melody was introduced to the Shetland islands "by Scots girls (in the last decade of the 19th century) who came up in their hundreds during the herring season to live and work as gutters and packers at the numerous fishing stations which mushroomed each year around the Shetland shoreline" (Cooke, 1986).

Perlman (1996) notes that, unlike Ireland, the tune is one of the most widely played by fiddlers on Prince Edward Island. At the beginning of the 20th century in Cape Breton a solo dance called The Irish Washerwoman was in the repertoire of Donald Beaton, an itinerant tailor and an influential dancer and fiddler in the region around Mabou. It originally consisted of 12 steps.

Back to Irish Washerwoman (1)