J. B. MILNE REEL. Scottish; Reel, Polka and/or Country Dance Tune (4/4 time). A Major. Standard tuning (fiddle). AB (Carlin): AA'BB' (Page). The melody is a mid-1950's composition by Dundee fiddler Angus Fitchet [1] [2] (1910-1998), already ensconced in traditional repertoire. Fitchet was born in Dundee in 1910 and became a leading country dance band leader and fiddler during the mid-20th century in Scotland. John Bannerman "J.B." Milne (1902-1968) was an entrepreneur in Dundee in the 1930's, who owned a string of cinemas in the Angus area; when he died he controlled 34 cinemas and bingo. He was also a violinist, who acquired his first violin at the age of nine. By the age 16 he was working in Dura Works from 5.30 am to 6 pm, teaching the violin from 6 pm to 8 pm, then playing in a dance hall until midnight. Following this he entered variety theater (where he was "musical director and cleaner" of an establishment), eventually owning his first venue. He was one of the first to install "talkies" in Scotland, which propelled him to success.

Angus Fitchet's first professional appearance was at the age of twelve when he was asked to substitute for a cinema violinist in pre-'talkie' days, when small bands or orchestras played to accompany the silent films. There is a Scottish dance that goes with the tune, by Hugh Foss. While perhaps apocryphal, the story goes that in the first half of the dance the movements depict film going through the reels of a projector (with the first couple standing for the threading film), while the second half depicts the rectangular corners of the screen. 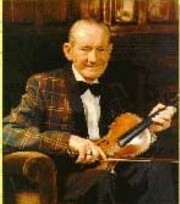