Find traditional instrumental music
This is the stable version, checked on 28 November 2022.
Jump to: navigation, search

Back to J.O. Forbes of Corse 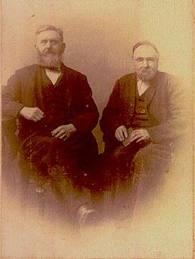 Peter Milne is on right
Composed by self-taught fiddler Peter Milne [1] (1824-1908), one of J. Scott Skinner's teachers, who earned a living playing in theaters until his opium addiction (he had become dependent while taking laudanum for a ailment while living in London) reduced him to busking on ferry-boats running across the Firth. Skinner (1904) writes: "Peter Milne was the founder of the present style of Strathspey playing, and the best all round player and composer of his day. His left hand was as unerring and accurate as a machine." In his manuscript copy of the melody [2] Skinner wrote that the melody was Milne's own favourite strathspey composition. Indeed, it is considered by those today to be one of his best pieces. Skinner also noted the tune could be played as a 'solo strathspey' (for listening) or to accompany a schottische.

James O. Forbes of Corse, Aberdeenshire, was the younger brother of Sir William Forbes of Craigievar.

Back to J.O. Forbes of Corse