JACK PUDDING. AKA and see "Merry Andrew (1)," "Step Stately (1)." English, Country Dance Tune (6/8 time). A Minor. Standard tuning (fiddle). AAB. The melody and country dance instructions were first published by John Playford in his English Dancing Master [1] (1651), and were retained in the long-running series through the 8th edition of 1690, then published by John's son, Henry. Beginning with the 4th edition of 1670 the alternate title "Merry Andrew" was given for the tune. 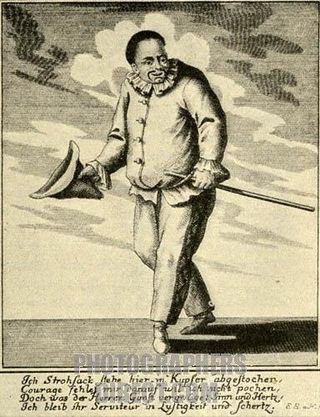 A 'Jack Pudding' is a buffoon who performs pudding tricks, such as swallowing a certain number of yards of black-pudding (i.e. blood pudding in a sausage casing). There are many such figures in Northern European tradition: to the Dutch he is Pickel-herringë; the Germans call him Hans Wurst (John Sausage); the Frenchman, Jean Potage; the Italian, Macaro'ni; and the English, Jack Pudding. Later the term appears to have been applied to a jester, harlequin, or a Punch-like clown figure. 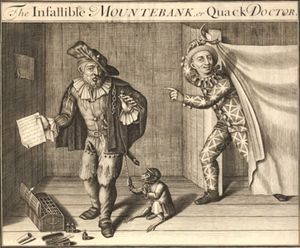 The alternate title, "Merry Andrew," was also a name freely applied to jesters or clowns, but derives from a character who assisted a mountebank. When an audience began to tire of a performance, the Merry Andrew would stir their attention by some antic, slapstick or clever quip. The name was said (by English antiquary Thomas Hearne) to have derived from Henry VIII’s physician, Andrew Borde [2], a man known for his quick wit and humorous repartee, but there is no support for this assertion. Thomas Holcroft, in his Memoirs (vol. 1) records this remembrance from his childhood:

...but above all, those then dear and delightful creatures, a quack doctor, peeping from behind his curtain, and the droll devil his merry Andrew, apparitions first beheld by me at Wisbeach fair. It was a pleasure so unexpected, so exquisite, so rich and rare, that I followed the merry Andrew and his drummer through the streets, gliding under arms and between legs, never long together three yards apart from him; almost bursting with laughter at his extreme comicality; tracing the gridirons, punchinellos, and pantomime figures on his jacket; wondering at the manner in which he twirled his hat in the air, and again caught it so dexterously in his hand. My curiosity did not abate, when he examined to see if there was not some little devil hid within it, with a grotesque squint of his eyes, twist of his nose, and the exclamation, "Oh, ho! have I caught you, Mr. Imp?"--making a snatch at the inside of his hat, grasping at something, opening his hand, finding nothing in it, and then crying with a stupid stare--"No, you see, good folks, the devil of any devil is here!" Then again, when he returned to the stage, followed by an eager crowd, and in an imperious tone was ordered by his master to mount,--to see the comical jump he gave, alighting half upright, roaring with pretended pain, pressing his hip, declaring he had put out his collar bone, crying to his master to come and cure it, receiving a kick, springing up and making a somerset; thinking his master kindly for making him well; yet, the moment his back was turned, mocking him with wry faces; answering the doctor, whom I should have thought extremely witty, if Andrew had not been there, with jokes so apposite and whimsical as never failed to produce roars of laughter. All this was to me assuredly, "the feast of reason and the flow of the soul!" As it was the first scene of the kind I had ever witnessed, so it was the most exstatic. I think it by no means improbable, that an ardent love of the dramatic art took root in my mind from the accidents of that day.

The dance and music collector Cecil Sharp (1859-1924) employed the tune for his interpretation of the dance "Step Stately."