Back to James D. Law's Reel

JAMES D. LAW'S REEL. Scottish, Reel. E Flat. Standard tuning (fiddle). AAB. Composed by J. Scott Skinner (1843-1927) in perhaps in honor of James D. Law (b. 1865) originally from Lumsden, Aberdeenshire, Scotland, where he became assistant to the Factor on the Durris Estates, Deeside, near Aberdeen. After marrying at the age of 21, Law emigrated to America, settling in the Camden/Philadelphia area where, after trying his hand in successive businesses, he became an early motion picture entrepreneur forming, in 1913, the Colonial Motion Picture Corporation with Fredrick S. Dudley, after securing the rights to several novels. He also wrote poetry and manuscripts, several of which were published, and invented the "Universal Clock" - one dial tells the correct time continuously and synchronously in any part of the world. 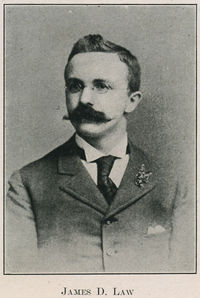 Back to James D. Law's Reel