JAMES F. DICKIE'S DELIGHT. AKA - "J.F. Dickie's Delight," "James F. Dickie." Scottish, Slow Strathspey or Air. A Major. Standard tuning (fiddle). AB. Composed in 1932 by Aberdeen fiddler and composer John Murdoch Henderson (1902-72) in honor of James Fowler Dickie [1] (b. 1886) of New Deer, Buchan, were he was a "weel-kent and respected player" for over fifty years, and whose forte, according to Hunter (1979), was playing his own 'florid' variations to many famous tunes. Alburger calls him "a player of great taste and polish," and notes the melody appears in Henderson's The Flowers of Scottish Melody (1935). Henderson himself remarked: "Jim is a player of great taste and polish. In the rendering of slow strathspeys and E flat airs his style is inimitable.". Dickie admired the playing of J. Scott Skinner, who influenced his somewhat idiosyncratic style. Paul Cranford says the first Cape Breton fiddler to record the tune was Winston Fitzgerald. 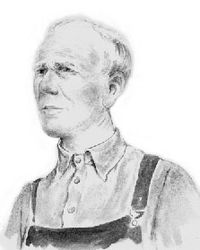