JAMES PLUNKETT. AKA and see "Young William Plunkett." Irish, Planxty (3/4 time). G Mixolydian. Standard tuning (fiddle). AB. Composed by blind Irish harper Turlough O'Carolan (1670-1738). Belfast collector Edward Bunting [1] (1773–1843) noted the tune from the playing of harper Charles Byrne at the end of the 18th century. O'Sullivan (1958) says that Bunting's version appears to be the original from which Percy Frency derived the air of his song "Phil the Fluter's Ball." Bunting had several versions of the tune, and printed one version under the erroneous title "Young William Plunkett," according to O'Sullivan, which was then picked up and reprinted by Francis O'Neill.

Little is known about James Plunkett, although Hardiman says that he hailed from Bunenedin, County Sligo, an assertion that O'Sullivan finds little evidence for. 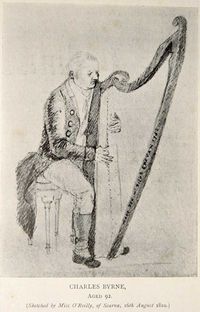 Charles Byrne entertaining at the O’Reilly residence at Scarva, Co. Down, drawn by Miss O’Reilly in 1810.

Source for notated version: Charles Byrne via Edward Bunting manuscripts [O'Sullivan]. Byrne was quite elderly when Bunting made his acquaintance toward the end of the 18th century, and is thought to have been born in County Leitrim around the year 1712. According to "The Memoirs of Arthur O’Neill" in Donal O'Sullivan's Carolan (1958), he was the second oldest of the ten Irish harpers who attended the Belfast harpers' gathering of 1792, and one of only five who had performed at all three of the Granard Harp Balls of 1781, 1782, and 1785.