Back to James Scott Skinner's Welcome to Inverness

JAMES SCOTT SKINNER'S WELCOME TO INVERNESS. AKA - "Scott Skinner's Welcome to Inverness." Scottish, March (4/4 time). A Major. Standard tuning (fiddle). AABB. A 'double-tonic' march composed by Alexander Grant (1856-1942) in honor of his somewhat older contemporary J. Scott Skinner (1843-1927). Grant was equally passionate about fly fishing for salmon and fiddling. He was known to his family and friend as simply ‘The Battan’, and found employment variously as a ploughman, draper, hairdresser, forester and tackle maker. He learned to fiddle as a child and had a sensitive ear--so much so that it is said he once refused to attend fiddle lessons from the local school teacher because he disliked the tone of his tutor’s fiddle. This sensitivity to tone and vibration also effected the design of his famous ‘Grant’s Vibration’ range of fly rods. Grant was a first rank soloist, and led the Highland Strathspey and Reel Society from its founding in 1903 to his death in 1942. 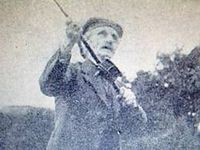 Back to James Scott Skinner's Welcome to Inverness