Back to Jamie Hardie

JAMIE HARDIE. AKA - "James Hardie." Scottish, Reel. D Major. Standard tuning (fiddle). AB. Composed by J. Scott Skinner [1] (1843-1927), who says: "Relative of the Famous Drumnagarry Reel for 'Bob Steel.'" In his manuscript copy [2] Skinner notes that the tune should follow the reel "Bob Steele" (which Skinner published as "Johnie Steele" in his Harp and Claymore collection). However, Alastair Hardie (1992) notes that the reel was written specifically to follow the strathspey "Miller o' Dervil (The)."

Jamie (James) Hardie (1836-1916) was an Edinburgh violin maker (brother of Charles Hardie) whom Skinner knew, who is reputed to have made his first cello at the age of nine and a violin at the age of fifteen. He eventually set up in business in Edinburgh, becoming (according to Scottish fiddler and teacher William C. Honeyman) one of the finest violin-makers of his time. He enjoyed a fine reputation as a craftsman, producing over two thousand instruments (the finest of which were based on the master Maggini's violins) during his long career. He was a member of the famous Hardie family who have been for generations Scots fiddlers of renown, whose members were famous for the 'North-East' style of fiddling; James himself was said to have considerable skill in playing strathspeys and reels. Hardie composer "Fisher's Rant," which was rearranged and renamed "Drumnagary" by Skinner. Skinner's reel "Jamie Hardie" has some currency among Cape Breton fiddlers. 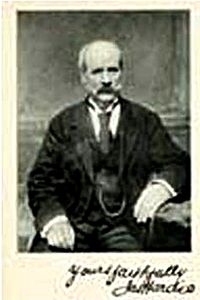 Back to Jamie Hardie