Find traditional instrumental music
This is the stable version, checked on 9 July 2020.
Jump to: navigation, search

Back to Jaunting Car (1)

JAUNTING CAR [1]. AKA and see "Back of the Haggard (1)," "Dickey Gossip (2)," "Dublin Hornpipe (3) (The)," "Lodge Gate (The)," "Pound Hill," "Russell's Hornpipe," "Woodcock Hill." American, Scottish; Hornpipe. D Major. Standard tuning (fiddle). AABB. The composition is credited to J. Hand in Ryan's Mammoth Collection (1883), referring to Jimmy or Johnny Hand, New England performers who were related in some way. "Can be used as a Clog" (Cole). Despite this attribution, it seems unlikely that one of the Hands had anything to do with composing it, for the melody appears under a variety of titles in England, Ireland and Scotland. In fact, its provenance is uncertain. It appears in the mid-19th century music manuscript collection of Church of Ireland cleric and uilleann piper James Goodman (County Cork) as "Dickey Gossip (2)" and in Kerr's Merry Melodies (published around the same time as Ryan's Mammoth Collection) as "Dublin Hornpipe (3) (The)" and "Jaunting Car." The first strain of the melody appears in the c. 1820 music manuscript collection of Joseph Kershaw, of Slackote, Saddleowrth (east of Manchester, England) in an untitled hornpipe (see "Kershaw's Hornpipe"). The first strain is cognate with the corresponding strain of the Irish hornpipes "Pound Hill," "Back of the Haggard (1)," and "Lodge Gate (The)," and appears to have derived from William Gow's late 18th century "Mrs. Dundas of Arniston." 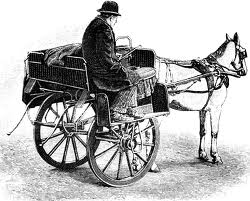 Back to Jaunting Car (1)