Jenny on the Railroad

Back to Jenny on the Railroad[edit]

JENNY ON THE RAILROAD. AKA and see "Paddy on the Turnpike (1)," "Little Peg n' Awl." American, Reel (cut time). USA; identified in Thede as a "Texas Tune," Oklahoma, Mississippi. A Mixolydian. Standard tuning (fiddle). AABB: AABBC (Phillips): AA'BB'CC' (Thede). A 'jenny' is a slang term for a female donkey. Related to "Paddy on the Turnpike (1)." Alan Jabbour sees the antecedent of the tune, at least in America, as "Colonel Crocket (1)" which appears in George P. Knauff's Virginia Reels, volume III (Baltimore, 1839). The melody also is cognate with southwest Virginia fiddler Henry Reed's "Route (The)," and Braxton County, West Virginia, fiddler Melvin Wine's "Little Peg n' Awl. "Jenny on the Railroad" is also strongly related to "Colonel Crocket (1)") which is also probably a variant. Confederate Captain Moses J. Bonner recorded a reel in 1925 for Victor Records (19699-A) called "Gal on a Log (2)" that may prove to be a member of this tune family. See also the Irish "Katy Jones Reel." 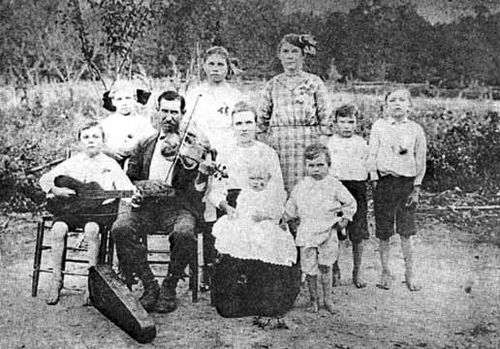 Back to Jenny on the Railroad[edit]