Back to Jerry's Beaver Hat[edit]

JERRY'S BEAVER HAT ({h-}Ata-Featan Diarmaid/Diarmada). AKA and see "Cat in the Corner (4) (The)," "Cooley's Jig," "Paddy Get Up," "Returned Yank (The)," "When Sick is it Tea You Want?" Irish, Double Jig. D Major. Standard tuning (fiddle). AABB. A popular session reel, that has crept into non-Irish traditions, popular as well among American contra dance musicians and Cape Breton fiddlers. The title references the centuries-long popularity of the beaver hat (until the mid-19th century), as beaver fur was a durable, water resistant and pliable substance for gentleman's hats. The animal was hunted almost to extinction on two continents, thus effectively ending the fashion. 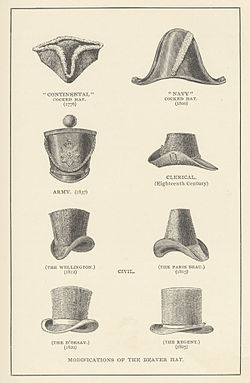 The tune was recorded under the "Jerry's Beaver Hat" title by the Moate Ceilidhe Band in 1953 (paired with "Maid in the Meadow"). The Kilfenora Ceili Band called the jig "The Returned Yank" when they recorded it in 1958.

Back to Jerry's Beaver Hat[edit]