Jesse the Flower of Dunblane

Find traditional instrumental music
This is the stable version, checked on 30 May 2021.
Jump to: navigation, search

Back to Jesse the Flower of Dunblane

JESSE THE FLOWER OF DUNBLANE. AKA - "Jessie the Flower of Dunblane," "Jessy the Flower of Dunblane." Scottish, English; Air (6/8 time). G Major (O'Neill): D Major (Ashman, Hall & Stafford): C Major (Manson). Standard tuning (fiddle). AB (Ashman, Manson, O'Neill): AABB (Hall & Stafford). O'Neill (1922) says: "Early in the nineteenth centtury, this song was composed by a modest weaver, Robert Tannahill of Paisley, and was set to an alleged ancient Scottish melody by Robert A. Smith author of the Irish Minstrel, and the Scottish Minstrel. According to Farquhar Graham, editor of Wood's Songs of Scotland, not a few of the airs in the latter work were composed by Smith himself (who composed the "Jesse" air prior to 1816). Whatever the origin of the above melody may have been it has a decidedly Gaelic tonality." "Jesse the Flower of Dunblane" can also be found in The Union Imperial Songbook, printed in Edinburgh by A. Hogg, J. Robertson Macreide & Co., and George Cowle & Co., London, 1815. 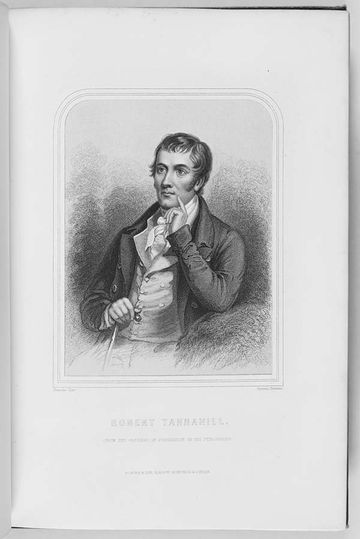 I recollect only two other occasions in which a song became immediately popular. The one was 'Jessie, the Flower of Dumblane', by Tannahill, the Paisley weaver, who was had up to London and lionized, and soon quarelled with Dr. Beattie, who composed the air, and said that the song owed all its popularity to his music, while the poet claimed it for his words. This was somewhere around the year 1816, when I was a boy of eight, and I well remember the rapid diffusion of the song; everybody seemed to be singing it, or listening to it, from royalty down to the street singer.

The air can be found in several 19th century musicians' manuscript collections, such as those of multi-instrumentalist John Rook (Waverton, Cumbria, 1840) and George White (Cherry Valley, N.Y., early 19th century).

Back to Jesse the Flower of Dunblane