Back to Jessie Brown of Lucknow[edit]

JESSIE BROWN OF LUCKNOW. Scottish, Pipe March (whole or 2/4 time). D Major. Standard tuning (fiddle). AAB. Jessie Brown was the subject of a story from the Sepoy Rebellion or Indian Mutiny of the mid-19th century. Lucknow is a city in northern India, and was the site of a famous siege. The date of the incident was September 25th, 1857, and the following version of the story, from 'the pen of a lady', was published in the Illustrated London News of December 19th, 1857. Jessie's last name in this often-repeated story has variously been given as Brown, Cameron, or MacPherson: 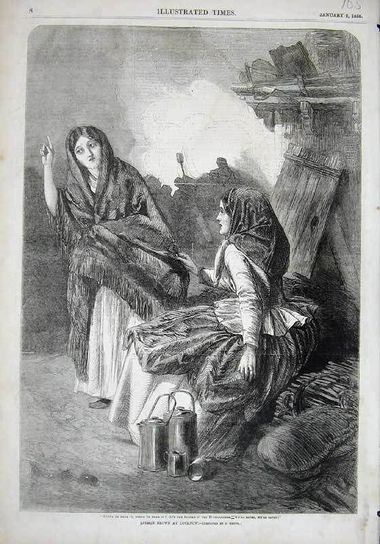 I had gone out to try and make myself useful, in company with Jessie Brown, the wife of a corporal in my husband's regiment. Poor Jessie had been in a state of restless excitement all through the siege, and had fallen away visibly within the last few days. A constant fever consumed her, and her mind wandered occasionally, especially on that day, when the recollection of home seemed powerfully present to her. At last, overcome with fatigue, she lay down on the ground, wrapped up in her plaid. I sat beside her, promising to awaken her when, as she said, ' her father should return from the ploughing.' She at length fell into a profound slumber, motionless and apparently breathless, her head resting in my lap. I myself could no longer resist the inclination to sleep, in spite of the continual roar of cannon. Suddenly I was aroused by a wild unearthly scream close to my ear. My companion stood upright beside me, her arms raised, and her bead bent forward in the attitude of listening. A look of intense delight broke over her countenance; she grasped my hand, drew me towards her, and said :—'Dinna ye hear it? dinna ye hear it? Ay, am no dreaming; it's the slogan of the Highlanders ! We're saved, we're saved! 'Then flinging herself on her knees, she thanked God with passionate fervour. I felt utterly bewildered. My English ears heard only the roar of artillery, and I thought my poor Jessie was still raving. But she darted to the batteries, and I heard her cry incessantly to the men:— 'Courage! hark to the slogan—to the Macgregors, the grandest of them a'. Here's help at last.' To describe the effect of those words upon the soldiers would be impossible. For a, moment they ceased firing, and every soul listened in intense anxiety. Gradually, however, there arose a murmur of bitter disappointment, and the *wailing of the women who had flocked out began anew as the Colonel shook his head. Our dull Lowland ears heard nothing but the rattle of the musketry. A few moments more of this death-like suspense, of this agonising hope, and Jessie, who had again sunk on the ground, sprang to her feet, and cried in a voice so clear and piercing, that it was heard along the whole line Will ye no' believe it noo P The slogan has ceased indeed, but the Campbells are comin'. D'ye hear P d'ye bear?' At that moment we seemed indeed to hear the voice of God in the distance, when the bagpipes of the Highlanders brought us tidings of deliverance; for now there was no longer any doubt of the fact. That shrill, penetrating, ceaseless sound, which rose above all other sounds, could neither come from the advance of the enemy nor from the work of the sappers. No; it was indeed the blast of the Scottish bag-pipes.

It's an example of a stirring Victorian tale of English courage, pluck and redemption. Dion Boucicault found it so, for he penned a play, Jessie Brown; or, The relief of Lucknow, in three acts in 1858, managing to extend a fairly short newspaper article into an evening's entertainment. It was very popular in the theater, and played for twenty years. Broadside ballads on the theme were also printed. Unfortunately, The story's veracity has never been ascertained, and it was almost immediately and vociferously challenged. Many doubted the existence of Jessie, but what ever last name.

The fact is that "Jessie Brown of Lucknow" was printed by Glasgow piper, pipe-teacher and pipe-maker William Gunn some nine years before the siege of Lucknow, and it may be that the title of his strathspey/march was insinuated into the story. Unfortunately we still do not know if there was a Jessie Brown associated with Lucknow at any time.

Back to Jessie Brown of Lucknow[edit]