Back to Jim Crow

JIM CROW. AKA - "Jump Jim Crow." American, Song Tune. D Major. Standard tuning (fiddle). ABC. "Jim Crow" song popularized on the minstrel stage of the mid-19th century. "Jim Crow" (and "Jim Crow Polka") were printed in an early surviving collection of minstrel music, The Complete Preceptor for the Banjo (1848), by 'Gumbo Chaff', a pseudonym for Boston publisher Elias Howe, and even earlier in Howe's Second Part of the Musician's Companion (1943). Howe sold the rights to the collection and others of his works to another Boston publisher, Oliver Dixon (who issued the Chaff tutor in 1851) on the condition that Howe refrain from publishing similar works for ten years. Dave Evans remarks on the similarity of the title "Jim Crow" to "John Crow," a folk name for a buzzard, and suggests that the "Jim Crow" song and dance is perhaps derived from the slave dance "The Buzzard Lope" (see Parish, Slave Songs of the Georgia Sea Islands, 1942). See also the Appalachian fiddle tune derivative "Jump Jim Crow." 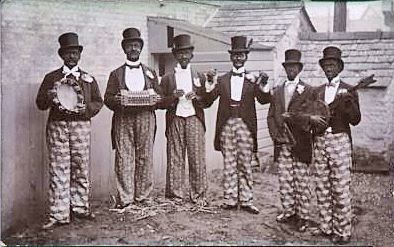 Turn about and twist about,
And do jes' so
An' every time you turn about
You jump Jim Crow. .... (Scarborough, On the Trail)

The popular melody was imported to England and, as were other minstrel tunes, was absorbed into traditional repertoire, where it appears in musicians manuscripts of the mid-19th century.

Back to Jim Crow