Back to Jim Kennedy's Favorite 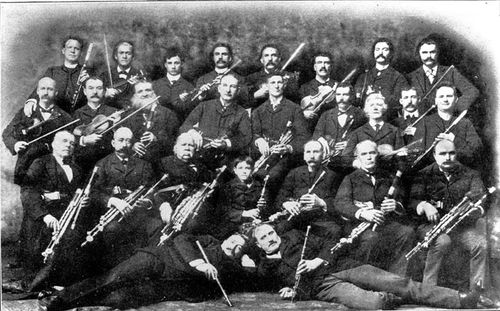 James Kennedy is standing in the back row, extreme right.
JIM KENNEDY'S FAVORITE (Roga Seamus Uí Ceinneidig). AKA and see "Bundle of Straw (The)," "Corry Boys (The)," "Follow me to Carlow," "Hare's Foot (The)," "Hare's Paw (1)," "Kennedy's Favourite," "Kennedy's Reel," "Lowlands of Scotland (The)," "Silvermines (1) (The)," "Tralee Lasses (The)." Irish, Reel. E Dorian. Standard tuning (fiddle). AA'B. The title probably refers to Chicago fiddler and park policeman James Kennedy, whom O'Neill called "a sweet, expressive fiddler" (Irish Minstrels and Musicians, p. 368). Kennedy was born in the early 1860's in Ireland, and learned his music from his father. A number of tunes in the early O'Neill collections are attributed to him as source. O'Neill clearly held him in high regard as a musician, for in a 1906 letter to Alfred Percival Graves in 1906 (printed in "A Few Gossipy Notes" in the Journal of the Irish Folk Song Society, London, O'Neill wrote: "James and Ellen Kennedy, Ballinamore, Leitrim, fine violinists: father a noted player, said to be the best in the country--James is remarkable for his smooth, round tones, and the entire absence of scratching of bow."

The tune, however, is only a version of a reel that had been circulating. Paul de Grae points out that an untitled version was printed by R.M. Levey in his first volume of Irish tunes (1856, No. 56), while collector P.W. Joyce and James S. Kerr both printed versions in the 1870's under titles "Silvermines (1) (The)", "Lowlands of Scotland (The)" and "Bundle of Straw (The)"[1].

Back to Jim Kennedy's Favorite