Back to John A. MacDonald

JOHN A. MACDONALD. Canadian, Reel. Canada, Cape Breton. B Flat Major. Standard tuning (fiddle). AB. Composed by Cape Breton fiddler and composer Dan R. MacDonald (1911-1976). The subject of the tune was, like the composer, a member of the Five MacDonald Fiddlers, consisting of John, Hugh, Bernie, Allan, Dan and Joan MacDonald on piano are all former Inverness County, Cape Bretoners. The group met in Detroit for the first time and after several meetings at dances and house parties decided to form a group. MacDonald also recorded solo albums, accompanied by his wife, pianist Barbara MacDonald. 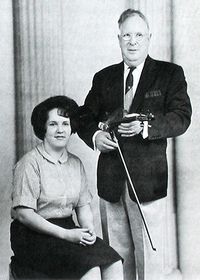 Back to John A. MacDonald