Back to John Brown's Dream 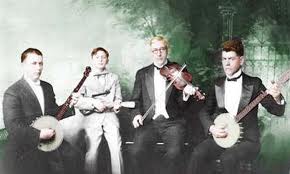 Walton, West Virginia, fiddler Franklin George is the source for the "Herve (or Harv) Brown's Dream" title, which he obtained from Jim Farthing, of southwest Virginia and West Virginia. George asserts (unconfirmed) that the title of the tune was originally "Herve Brown's Dream," but the name Herve was supplanted by John because of the notoriety of the famous abolitionist who was hanged at Charles Town, Virginia in 1859 for treason committed in the raid of the U.S. Arsenal at Harper's Ferry earlier that year. Most commentators agree that the tune has considerable age, and may predate the Harpers Ferry incident in the mid-19th century. Dwight Diller has said that the West Virginia tune "Jimmy Johnson" (AKA "Jimmy Johnson bring the Jug around the Hill") was the musical precursor to "John Brown's Dream," and opined that "Jimmy Johnson" was the far superior melody. The Kessinger Brothers (Clark and his nephew Luches) recorded the tune as "Johnny bring the Jug 'round the Hill" for Brunswick Records in 1929. Lewis County, northeast Kentucky, fiddler Buddy Thomas knew the tune as "Stillhouse Branch." Thomas learned his version from his cousin, Perry Riley (1893-1973). Kerry Blech has even heard the title "Brown Stream," a mondegreen of course (for "Brown's Dream"), but both titles referring to moonshine. Hobart Smith called his version of the tune "Devil's Dream" on his Rounder recording (Rounder CD 0032).

Back to John Brown's Dream