Back to John Cheap the Chapman

JOHN CHEAP THE CHAPMAN. Scottish, Reel. G Minor. Standard tuning (fiddle). AB (Surenne): AAB (most versions). Composed by Nathaniel Gow (1763–1831), fiddler, composer, music publisher and bandleader in Edinburgh. He was a son of the famous Scots fiddler/composer Niel Gow. A chapman was a hawker or peddlar, and, indeed the title refers to a volume by Dougal Graham [1] (c. 1724–1779), one of the most famous chapmen, even though he was physically deformed and of rather small stature. Graham wrote numerous very popular chapbooks (under assumed names), one of which was entitled A History of John Cheap, the Chapman. He was a contemporary of Nathaniel Gow's father, Niel Gow (1727–1807). Graham was appointed the official position of skellat bellman of Glasgow (the 'skellat bell' was the one used for ordinary announcements by the town cryer, whereas the 'mort' or 'deid' bell was used to intimate deaths). 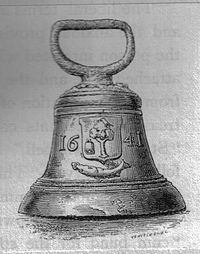 The 1641 Glasgow 'deid bell'
In the discharge of his duties he was described as:

...a little man scarcely five feet in height, with a Punch-like nose, with a hump on his back, a protuberance on his breast, and a halt in his gait, donned in a long scarlet coat nearly reaching to the ground, blue breeches, white stockings, shoes with large buckles and a cocked hat perched on his head, and you have before you the comic author, the witty bellman, the Rabelais of Scottish ploughmen, herds and handicraftsmen.[2]

Back to John Cheap the Chapman