He was said to be a wealthy draper from Cheapside in London, who owned land at Olney in Buckinghamshire, near where Cowper lived. It is likely that he was actually a Mr Beyer, a linen draper of the Cheapside corner of Paternoster Row. The poem tells how Gilpin and his wife and children became separated during a journey to the Bell Inn, Edmonton, after Gilpin loses control of his horse, and is carried ten miles further to the town of Ware. There are a number of sites commemorating the exploits of John Gilpin, most notably Gilpin's Gallop, a street in the village of Stanstead St Margarets said to be on the original route taken by the horse's unfortunate pilot. 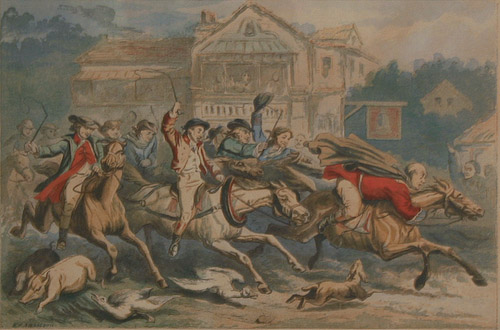 The Ride of John Gilpin

John Gilpin was a citizen
Of credit and renown,
A train-band captain eke was he,
Of famous London town.

John Gilpin's spouse said to her dear,
"Though wedded we have been
These twice ten tedious years, yet we
No holiday have seen.

"To-morrow is our wedding-day,
And we will then repair
Unto the 'Bell' at Edmonton,
All in a chaise and pair.