Back to John Kelly's Favourite

JOHN KELLY'S FAVOURITE (Rogha Sheáin Uí Cheallaigh). Irish, Reel. G Major/Mixolydian. Standard tuning (fiddle). AABB. Composed by fiddler John Kelly (1912-1989), originally from Rehy West, between Carrigaholt and Kilbaha in west County Clare. Kelly moved to Dublin early in his life and became a mainstay of the Dublin traditional music revival in the mid-20th century. A member of Dublin's Castle Céilí Band, he also played with Ceoltóirí Laighean (which included his son, fiddler James Kelly). He had definite opinions on the tradition and could be irascible in his grip on 'pure drop'. Tom Munnelly tells the following story: 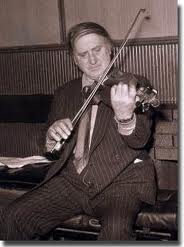 During the preparations for the O'Riada Memorial concert in the National Concert Hall in Dublin (ca. 1990?) Paddy Glackin and Donal Lunny were taking part in the rehearsals. When they finished for the night they headed down to The Four Seasons pub in Capel Street. This was next door to John Kelly's little shop, 'The Horseshoe' and John played there most nights in his post-O'Donoghue's period. When the two lads entered they sat at the bar and had a pint. As was to be expected, soon old John waved his bow and indicated that he wanted Paddy to get his fiddle and join in. (And when John waved his bow at you, in his territory, you did what he requested!).

Back to John Kelly's Favourite