Back to John MacColl's Farewell

JOHN MACCOLL'S FAREWELL. AKA – "Second Regiment Scottish Horse", "John MacColl's Farewell to the Scottish Horse." Scottish, Pipe March (2/4 time). B Minor. Standard tuning (fiddle). AABB'. Glasgow-based John MacColl (1860–1943) was a 20th century Highland dancer, piper, fiddler and composer of Highland pipe music, renowned for his 2/4 marches. MacColl was born at Kintallen, Oban. He was taught by ear by his piper father, and later took lessons from Pipe Major Ronald Mackenzie at Fort George, gaining such skill (according to the Celtic Monthly magazine of 1900) that between 1882 and 1900 he won upwards of two thousand prizes in his lifetime (as if that weren't enough, MacColl also won prizes for running, leaping and golf). Paul Stewart Cranford (2000) notes that MacColl’s student, Sandy Boyd, brought MacColl's music to Cape Breton and was very influential. The march has been recorded frequently by Cape Breton fiddlers. "John MacColl's Farewell to the Scottish Horse" is the name of a well known 6/8 march by John McColl. The "Farewell to the Scottish Horse" name was apparently applied in error to this tune, perhaps first in the Logan Collection, where it may have been swapped with "Second Regiment Scottish Horse". 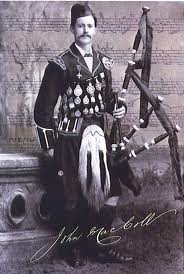 Back to John MacColl's Farewell