Back to Johnnie Queen's Clog 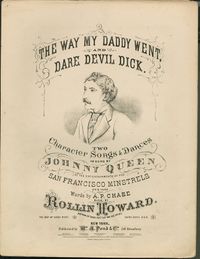 Queen and West constituted one of the great song and dance teams in minstrelsy. They formed a partnership about 1868, which was terminated by the death of Mr. Queen. Together they played several prominent minstrel engagements, and later went to Harrigan and Hart's in New York, where Mr. West remained, all told, about twenty-two years. Mr. Queen was an exceptionally clever black-face comedian, while Mr. West, in addition to his ability as a dancer and comedian, was proficient on the banjo. John Queen made his first appearance as a clog dancer in Boston with Morris Bros., Pell and Trowbridge's Minstrels. While with that company, he, in conjunction with R.M. Carroll, did the first double clog dance ever seen in minstrelsy. William West began his theatrical career in 1857 as a black- face performer, and until about 1863 played mostly with circuses. His firs minstrel engagement was with Duprez and Green. Subsequently he played with Hooley at the Novelty Theatre in Brooklyn; with the San Franciso's in New York, and with Bryant's, Wood's, and Morris Brothers. Mr. West's last stage appearance was about 1901. John Queen (McQueeny) was born in St. Albans, Vt., November 19, 1843; he died in New York, February 11, 1884. William West (Cox) was born in Leicester, England, May 3, 1837. (p. 135).

Douglas Gilbert (1891-1948) mentions Queen in his volume entitled American Vaudeville: Its Life and Times (Dover Publications, New York, 1940). In this passage Gilbert talks about the various and numerous contests between performers in the mid-latter 19th century, who competed usually for silver cups--a winner aided his booking time: 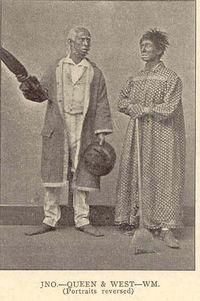 Most popular and most numerous were the clog-dancing contests: Lancashire clog, American clog, hornpipe clog, trick clog, pedestal clog, and statue clog. Dancing was judged according to time, style, and execution, and separate judges checked each feature. It was the habit of some judges to go beneath the stage and listed to the beat. Sand jig dancing was judged in the same manner. Possibly clog did not originate in America, but America made it its own, and our performers were unbeatable. A clog dancer named Queen electrified the English music halls when he went abroad for a tour in the eighties. They found his triples, rolls, and nerve steps uncanny, refused to believe he accomplished them unaided by tricks, and caused him no end of embarrassment by demanding to see his shoes. Queen stopped all that by making his entrance in slippers and passing around his shoes for the audience to examine, as proof that he used no clappers or other Yankee gadgets. When the shoes were returned he put them on in full view of the audience and went into his act. (p. 24).

Back to Johnnie Queen's Clog