Find traditional instrumental music
This is the stable version, checked on 26 September 2019.
Jump to: navigation, search

Back to Johnny Come Along

JOHNNY COME ALONG. American, Reel (cut time). USA, Kentucky. G Major. Standard tuning (fiddle). ABB (Titon): AABB (Phillips). "Johnny Come Along" is a tune whose only source is Clyde Davenport [1]. The tune is mistakenly printed in the Phillips Collection of American Fiddle Tunes, vol. 1 (1994, p. 87) under the title "Five Miles Out of Town" but also appears again in the same volume as "Johnny Come Along." On the whole, "Johnny Come Along" seems to be a version of "Give the Fiddler a Dram," song/tune from that also supplies Davenport's title. The Holy Modal Rounders and the Byrds recorded the following traditional verse: 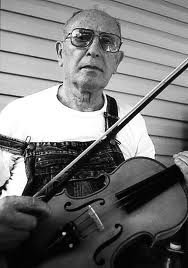 The second (high) strain is related to "Davy Dugger."


See also listing at:
Hear Clyde Daveport's 1981 version at Berea Sound Archives [2]
See a clip of a banjo version of the tune [3]

Back to Johnny Come Along