Johnny Get Your Hair Cut

Find traditional instrumental music
This is the stable version, checked on 27 January 2021.
Jump to: navigation, search

Back to Johnny Get Your Hair Cut

JOHNNY GET YOUR HAIR CUT. AKA and see "Granny Will Your Dog Bite? (1)" "Chippy Get Your Hair Cut," "Gippy Get Your Hiar Cut." American, Reel. D Major. Standard tuning (fiddle). AABC. Samuel Bayard (1944) reported that the first part of this tune (unaccompanied by any other strain) was sung in southwestern Pennsylvania to the ditties:

Granny will your dog bite, etc.--No, child, no!

Joel Shimberg reports that West Virginia fiddler Melvin Wine sang a similar snatch of verse to the tune, "Gippy get your hair cut short like mine." Bayard: "These little refrains are current all over the country, often to entirely different strains of music. In Pennsylvania a playparty song was also sung to this melodic fragment--a set is in Bayard Coll., No. 245; and other sets of this strain, associated with differing secvond parts, are Bayard, Nos. 104, 309. This is the only version known to the editor which is furnished with a third part. It well be noticed that the third section appears to be more modern than the others, and is distinctly inferior--something which can frequently be observed in extra sections arbitrarily tacked onto traditional instrumental airs. The player was rather proud of knowing a set containing three parts instead of the normal two: this attitude is likewise often encountered in similar circumstances. The first part of (this tune), with notes about the various little jingles with which the strain has been associated is in Sandburg, The American Songbag (edition of 1927), p. 158; and a version of the same strain, with a different second part attached, is in Linscott, p. 85" (Bayard, 1944). Some Appalachian fiddler believe "Johnny Get Your Hair Cut" and "Granny Will Your Dog Bite" are different tunes. 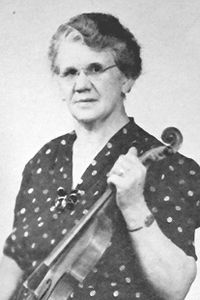 Additional notes
Source for notated version : - Mrs. Sarah Armstrong (Derry, Pa., 1943) [Bayard]. Armstrong (nee Gray) came from a musical family of Scottish descent and began playing the fiddle at age five, learning many of her tunes from her Uncle Laney, the most accomplished fiddler in the family. She is the principal contributor of tunes to Bayard's Hill Country Tunes.

Back to Johnny Get Your Hair Cut