Back to Jolly Dogs

JOLLY DOGS. AKA and see "Slap Bang, Here We Are Again," "School of Jolly Dogs (The)." American, English; Polka. A Major (Ford): D Major (Plain Brown). Standard tuning (fiddle). AABB. The polka was composed by C. H. R. Marriott, published in 1864. Ellis Knowles piece is more elaborate (and faithful to the published version) than the rather simple version noted by Ford, and includes some introductory bars and and extra part. Marriott's piece was based on an earlier (1839) piece called "Slap Bang, Here We Are Again" by Alfred Vance (whose real name Alfred Peck Stevens). 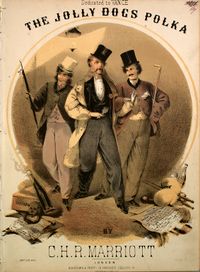 Source for notated version: No. 2 in the music manuscript book of Ellis Knowles, a muscian from Lancashire, England, c. 1847 [Doyle].

Back to Jolly Dogs