JUMP FINGERS. Old-Time, Breakdown. USA; Nebraska, Missouri. C Major. Standard tuning (fiddle). AABB. The tune was one of '100 essential Missouri tunes' listed by Missouri fiddler Charlie Walden. Described as a "parlor novelty piece" by Mark Wilson. Composition credit is claimed by George "Jeffie" Pounds, who was playing the tune in a barber shop that happened at the same time to be patronized by Nebraska fiddler Bob Walters. Walters listened to it a few times, then played it expertly himself, causing the exasperated Pounds to rush out of the shop (see liner notes to Rounder CD0375). 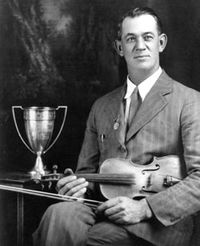