Back to Kaiser's Defeat Jig[edit]

KAISER'S DEFEAT JIG. AKA - "Bandbox." American, Reel. USA, North Georgia. G Major. Standard tuning (fiddle). AABB. The tune was composed and recorded by North Georgia/Tennessee fiddler Robert "Allan" Sisson (1873-1915) in 1925, when he traveled to East Orange, N.J., for a session with Victor Records (2/26/25). Sisson recorded ten sides, many of them (if not all) his own compositions, although "Kaiser's Defeat Jig" was not released as a commercial recording by Victor. Robert Allen Sisson was influenced at a very young age to play fiddle by his uncle, Ira Arnold Sisson, a well-known fiddler in his own time. It was said that Allen began playing the fiddle while still just a small child, and by age twelve, he was regarded as the best fiddler in North Georgia. In 1921, Sisson was named the Tennessee State Fiddle Champion. According to Gail Gillespie, the tune was also played by Manco Snead. 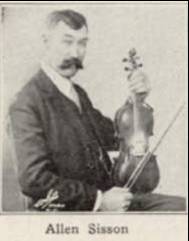 Despite the appearance of 'jig' in the title, the tune is not a 6/8 time tune but rather a slow breakdown (reel) or quick march or polka. It sounds to some ears as a version of the Kerry slide "Kaiser (The)."

Back to Kaiser's Defeat Jig[edit]