Long before Lady Morgan wrote the words of "Kate Kearney", the melody was known. As "The Beardless Boy" it was printed in Bunting's General Collection of the Ancient Irish Music (1796) and again as "The Disipated Youth" in A General Collection of the Ancient Music of Ireland published in 1809. In the latter year it appeared also as "Kate Martin" in Murphy's Irish Airs and Jigs. As a waltz tune "Kate Kearney" had but one drawback--it lacked a serviceable second part or strain. This, however, was supplied by some orchesta leader, but it was essentially German in composition, and devoid of any trace of Irish feeling. O'Farrell, a celebrated Irish piper, who published in London six small volumes of music suitable for his instrument--1797 to 1810--attempted two variations on "Kate Kearney" with indifferent success. [pp. 134-135]

The Lady Morgan whom O'Neill references is an Irish writer, born Sydney Owerson [1] (c. 1776-1859), who wrote verses to Irish airs that she collected. 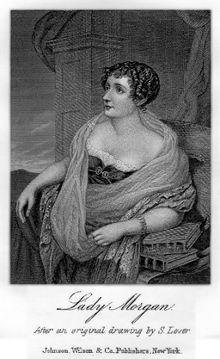