KELSTON HOUSE. English, Country Dance Tune (3/4 time). D Major. Standard tuning (fiddle). AABB. The melody appears in all four editions of The Second Volume of the Dancing Master [1] (1718-1728), published in London by John Young, heir to the Playford publishing concerns. It also was printed by Walsh and Randall in their The New Country Dancing Master, Second Book (London, 1710) and in Walsh and Hare's The Second Book of the Compleat Country Dancing-Master (London, 1719).

Kelston House was a country manor near the village of Kelston, near Bath, northeast Somerset, England. Construction was started by John Harington in 1567, and it was finished by his son in 1574, and intended to be one of the grandest houses in the county. A walled courtyard remains of the structure, which is nearby the present house, which dates to the 1760's. John Harington was appointed High Sheriff of Somerset in 1591. His descendant, Henry Harington (1686-1769, who held tenure of the manor during John Young's era), fell into debt and was forced to sell Kelston House in 1759. 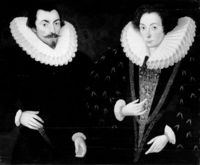