Find traditional instrumental music
This is the stable version, checked on 13 November 2022.
Jump to: navigation, search

Back to Kentish Cricketers 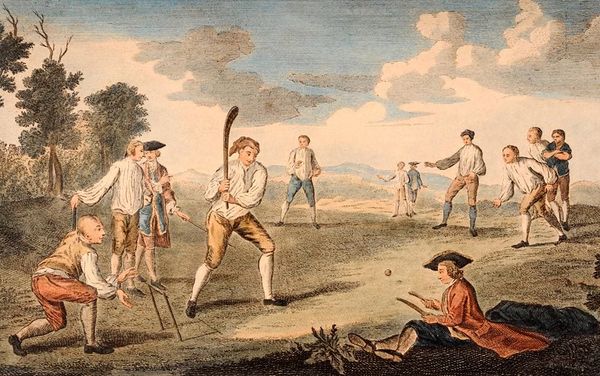 KENTISH CRICKETEERS. AKA and see "Honley Cricketers (The)." English, Country Dance Tune (2/4 time); New England, Polka. D Major. Standard tuning (fiddle). AABB. Kent is the oldest county name in England, probably derived from the Celtic root word canto, meaning an edge or rim. The name Kantion was first recorded by seamen referring to the south-east corner of the island, bordered by the sea. Kent became one of the first Anglo-Saxon kingdoms of England (Matthews, 1972). The English game of cricket is said to have originated in the sheep-raising country of the South East, the animals having nubbed the pastures into functional gaming grounds. The first recorded cricket match took place in Kent either in 1646 or in 1709 (when a Kent team played Surrey at Dartford). Cricket in Kent was further developed under the patronage of MP Sir Horace Mann (1744-1814) a member of the Hambledon club and several Kentish organizations. James Pycroft, in his 1854 book The Cricket Field: or, The History and the Science of Cricket, remarks:

In the last century, when the wagon and the packhorse supplied the place of the penny train, there was little opportunity for those frequent meetings of men from distant counties that now puzzle us to remember who is North and who is South, who is Surrey or who is Kent. The matches then were truly county matches, and had more of the spirit of hostile tribes and rival clans. "There was no mistaking the Kent boys," said Beldham, "when they came staring in the Green Man. A few of us had grown used to London, but Kent and Hampshire men had but to speak, or even show themselves, and you need not ask them which side they were on."

Back to Kentish Cricketers