KEW GARDENS. English, Country Dance and Reel. D Major. Standard tuning (fiddle). AABB. The country dance and melody were composed by Ignatius Sancho (1729-1780) and were first printed in his Minuets, Cotillons & Country Dances...by an African (1767, p. 12). Sancho was a former slave who became emancipated and found advancement and patronage from the wealthy Montagu family. He published four collections of minuets, country dances and songs in the second half of the 18th century. The country dance directions and tune were also printed in Straight & Skillern's Two Hundred and Four Favorite Country Dances vol. 1 (c. 1775) and Thomas Skillern's Skillern's Compleat Collection of Two Hundred & Four Reels...Country Dances (London, 1780), one of several tunes from Sancho's collection appropriated without credit to the composer. 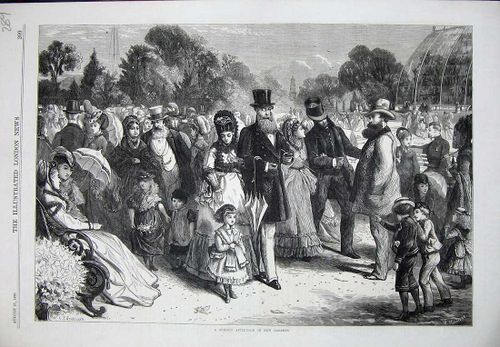 A summer afternoon in Kew Gardens, 1870.

The botanical gardens at Kew, west London, date to 1759, begun by Princess Augusta (mother of King George III), assisted by gardener William Aiton and botanist Lord Bute. King George III inherited the property, along with the nearby country house and estate of King George II, and he decided to combine the two gardens, putting Joseph Banks in charge of the project. Banks had recently returned from a circumnavigation of the globe with Captain Cook, bringing back with him a variety of exotic plants. It was banks who established the reputation of Kew Gardens as a leading horticultural research center.