Back to King's Lament

KING'S LAMENT. AKA and see "Dickey's Discovery." Old-Time, Breakdown. D Major. Standard tuning (fiddle). AB. The tune was in the repertoire of Mel Durham, born in southern Illinois (near Johnsonville) in 1914. Lotus Dickey (Dickey's Discovery) and Harvey Taylor are also southern Indiana/Illinois fiddlers who had a version of the tune in their repertoire. See also Harvey Taylor's "Brisk Young Soldier", which shares the first strain of this tune, although the second strains diverge. Durham recalled the tune to writers Steve Goldfield and Carolyn Russell (Old Time Herald, vol. 5, No. 8, "Mel Durham: Cosmopolitan Old-Time Fiddler" [1]) 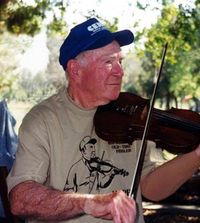 I played one tune for a fellow named Jack Phillips, who knows Chirps Smith, and he said, 'Chirps Smith plays that tune.' I said, What's he call it?' Then he told a story about Lotus Dickey. Dickey was trying to remember a tune and came up with this one instead. He couldn't remember the name so the guy recording it says, 'Well, we'll call it "Dickey's Discovery." We call it "King's Lament" after George King, a blacksmith and a fiddler in Johnsonville, Illinois. I got the tune through my dad. I played it for Chirps, and he said, 'That's the tune all right.' He said maybe that's the name, and I said I wouldn't bet on it because a lot of tunes have different names.

Back to King's Lament