Back to King George IV's Welcome

KING GEORGE THE IVth('s WELCOME). AKA - "King George the IV Highland." Scottish (originally), Canadian, Irish; Strathspey & Highland. Canada; Prince Edward Island, Cape Breton. Ireland, County Donegal. A Dorian (Skye): A Dorian/Mixolydian (Athole, Perlman). Standard tuning. AAB (Skye): AA'B (Little). This composition is credited to Captain Daniel Menzies by MacDonald in his Skye Collection, where a note indicates it is part of a "Skye set." Cape Breton/PEI settings are in the Dorian/Mixolydian mode, similar to that in MacDonald's Skye Collection. Perlman (1996) notes this strathspey is a widely-played tune on Prince Edward Island, and Paul Cranford similarly notes "King George" is a part of the standard Cape Breton repertoire (usually as part of a medley with the strathspey and reel "Miss Lyall (1)" and "King's Reel (The)"). It has been recorded often by Maritime fiddlers. The strathspey was also in the repertoire of Donegal fiddlers John Doherty, and Francie and Mickey Byrne, and has been recorded by other Irish musicians with Donegal connections (See "King George the IV Highland").

It is perhaps fitting that the piece should have such longevity, as the personage of the title was a lover of dance music and a convivial patron and supporter of English and Scottish musicians, especially during his years as the Prince of Wales and the Prince Regent. When the famous Scots composer and violinist Nathaniel Gow journeyed to London he was frequently honored with invitations to the private parties of the Prince, who on occasion joined Gow in the performance of contemporary concert music (the Prince was a respectable violoncello player). When George visited Scotland in 1822, Gow was among the best of the musical talent of the country to be summoned to the Dalkeith palace to participate in the occasion. The Prince publicly remembered his London visits with Gow to the assembly and, and during the course of the subsequent banquet, he rose from his table to go to Gow's, ordered him a goblet of fine wine, and reiterated the pleasure he had taken in listening to Gow's performances over the years. The musician was so overcome by this familiarity and royal acknowledgement that all he could do was to mutter in a choked voice, "God bless Your Majesty." 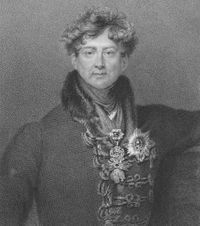 Back to King George IV's Welcome