Back to King George V's Army

KING GEORGE V's ARMY. AKA and see "Kitchener's Army (1)." Scottish, March (2/4 time). A Major. Standard tuning (fiddle). AABBCCDD. Composed by Pipe Major George S. McLennan [1] (1884-1929) of the Gordon Highlanders, a renowned composer of pipe tunes, a skilled competitor, and a pipe-maker. The title refers to the British army of World War I, of which McLennan was a member. The Gordon Highlanders' pipe book explains: "Having heard [McLennan's] composition 'Kitchener's Army' which he composed in 1915 for the new volunteer army, the 'old sweats' asked him for a tune to commemorate their efforts up to that point in the war. GS was having a nap on his bunk and heard the drummers practising a beating for the tune 'East Neuk of Fife' and he composed this tune, 'King George V's Army' to suit the beating he heard."

There is some confusion of titles between "Kitchener's Army" and "King George V's Army", two distinct tunes albeit both composed by McLennan. 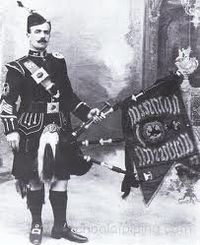 Back to King George V's Army