Back to Kiss Me Again Waltz

KISS ME AGAIN WALTZ. Old-Time, Waltz. USA, Missouri. B Flat Major. Standard tuning (fiddle). AB. The melody is a composition of composer Victor Herbert (1859-1924), who was born in Ireland and who died in New York. Herbert spent his formative years in Germany, becoming a skilled cello player as well as a bandmaster and conductor. He was co-founder of the American Society of Composers, Authors, and Publishers (ASCAP), serving as vice president for a decade. 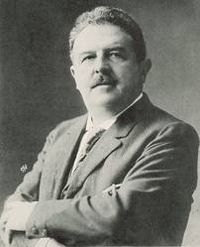 The melody was composed as "If I Were on the Stage" (Kiss Me Again), words by Henry Blossom (1866-1919), for the operetta Mlle. Modiste. American audiences may have been more familiar with the song from the Warner Brothers film adaptation of the operetta called "Kiss Me Again" [1] (1931). The tune was popular in western fiddle contests for some years.

Back to Kiss Me Again Waltz